Pre-book your parking and save up to 77%

Etihad Airways flights leave from Manchester Airport every morning and evening for the modern hub of Abu Dhabi, in the United Arab Emirates, from where you can connect to hundreds of other destinations, including Australia, South Africa and Thailand.

Etihad is one of the world's safest airlines, and operates a modern fleet of planes. Most Etihad flights from Manchester Airport are on the Boeing 787 Dreamliner and offer a fantastic experience, no matter whether you're travelling in Economy or Business class. You may even be lucky enough to travel on the special Manchester City branded Dreamliner, which entered service in October 2019; its first flight was from Abu Dhabi to Manchester Airport.

Etihad flights from Manchester to Abu Dhabi offer great onboard service, a delicious menu and a wide range of movies and TV shows to enjoy on your personal entertainment screen. 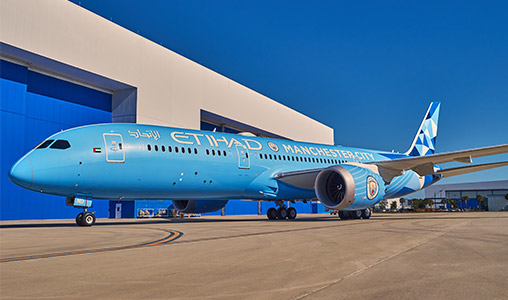 Check in opens 3 hours before departure

You can check in for your flight 3 hours before your departure time. The check in desks close one hour before departure.

You can fly from Manchester to Abu Dhabi on Etihad every morning and evening. The flight takes around 7 hours.

Airport essentials for your Etihad flight from Manchester Airport

Save time and money, and upgrade your airport experience for a more pleasurable trip

A huge range to choose from

From just £4 per person

Visitors to Abu Dhabi will find a gleaming, modern city with fantastic sights, food and hotels. Top things to do in Abu Dhabi include:

You can travel to Australia from Manchester Airport on Etihad Airways, with just one connection in Abu Dhabi, United Arab Emirates.

Etihad flies direct from Abu Dhabi to Brisbane, Sydney and Melbourne in Australia; if your final destination is elsewhere in Australia you can catch one of their codeshare flights within the country, or travel on to New Zealand.

Gateway to the Gold Coast and Sunshine Coast and a sunny, cultured destination in its own right, trips to Brisbane are laid back, fun and filled with activities. In 2015 Brisbane was voted one of the top ten most beautiful cities in the world, but if you're not a city person you won't have to travel far for a dose of nature; Moreton Bay on the outskirts is blessed with sandy beaches and clear blue waters that are home to whales, dolphins and turtles.

You have to get a selfie at the iconic Sydney Opera House of course, but Sydney has much more to offer. This surprisingly green and sophisticated city is like no other - stunning national parks virtually surround the city, while you'll find still-wild areas even around the harbour area. Shopping, restaurants and nightlife are up there with the world's best, while you'll never be short of photo opportunities; daredevils should try a climb up to the top of the Sydney Harbour Bridge.

Among Etihad's destinations in Australia, Melbourne is definitely the cool kid of the bunch. A deeply-ingrained coffee cultures meets a vibrant street art scene in one of the world's most hipster cities. A typically Australian openness means though that even in its coolest corners, Melbourne is never aloof. Don't miss day trips to wine country, the beach at St Kilda and to see the penguins on Phillip Island.

Vibrant Mumbai is the gateway to India and offers a lively and varied introduction to the country to visitors. If you took the art deco style of Miami and the hustle of New York, mixed them up and transplanted them to India, you’d have something close to Mumbai. A city of 22 million people, it’s one of the most densely populated urban centres in the world – a city of dreams, glamour and enormous contrasts. A thoroughly modern city built on commerce – including the Bollywood film industry – it’s also home to some of India’s most iconic sights and most delicious food.

Why not treat yourself to these amazing add-ons?

Pre-book to guarantee entry, from £24

Everything you need to know for your journey through Manchester Airport

What to do if your luggage is lost or delayed

Be prepared for going through airport security

Advice for checking in for your flight

From free wifi to VAT refunds and our Runway Visitor Park, find out what facilities are available at Manchester Airport